New use for an aqueduct from the Fascist period 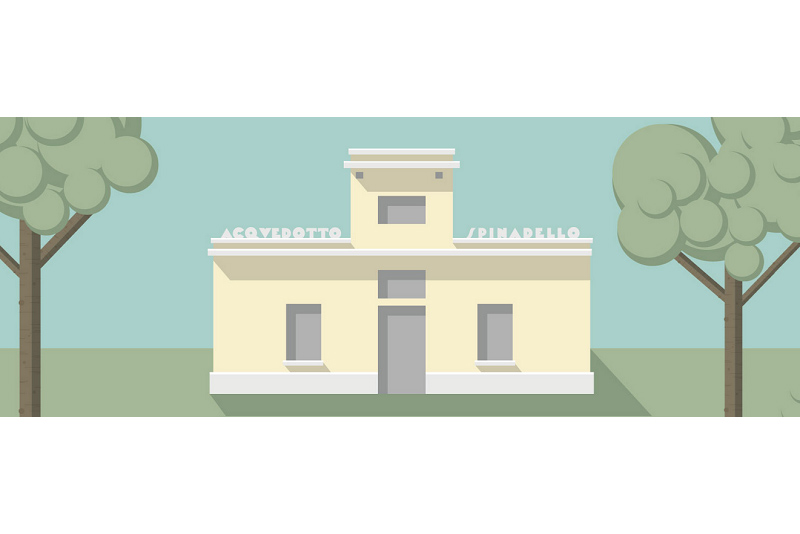 For many years, the former pumping station of the Spinadello Aqueduct has been inactive. Today, the place is part of a project of urban regeneration. Immersed in a natural park, the site became visitors centre.

The origins of the project go back to the exhibition Totally Lost held in September 2016, which transformed the former pumping station into a site of cultural activity. This was a chance to show the value and potential of the space, by involving the local community actively and offering activities such as excursions, birdwatching etc.

Today, the aim is to promote new uses of the building and the surroundings of the natural park, a real oasis. Many topics interwine: flora, fauna, architectural heritage from the 20th century, industrial archaeology, as well as remains of the Roman period.

History and phases of the site

According to the European Landscape Convention, the regimes have strongly affected and marked the natural landscapes of the territories involved. In some totalitarian regimes like Nazism, landscape was strictly linked to the Aryan identity.

The original building and the surrounding landscape were modified during fascism in order to emphasize their function In their modernising typology. A central tower and a futurist three-dimensional writing were added on the building of the aqueduct and a Roman boulevard was created, with a row of pine trees on each side leading to the main entrance. These changes were introduced in order to surprise people visiting the aqueduct and impress them with the majesty of the avenue and the modernity of the building and its electric pumps.

The aqueduct worked for decades ending abandoned during the 80s. Nature slowly gained back its space. The small underground rooms where water was drowned got populated by tritons, grass became the perfect bed for deers and other wild animals. The territory became a humid zone and alluvial wood once again, so rich in biodiversity that it was chosen to be a special protected zone, so residents came back to Spinadello, but with a different attention towards the environment. The Municipality restored the building (including the original machinery), which was admitted into the ATRIUM Cultural Route. In 2016, the visitors centre “Spinadello Centro Visite Partecipato” of the meanders of the Ronco river was created.

The experience of the Spinadello Aqueduct and the surrounding area is a clear example of an exclusively rural site, characterised by country and colonic houses, subsequently transformed and modernised by fascism with architectural, artistic and landscaping elements that were functional to the celebration of the regime, then abandoned during the ‘80s, restored and given back to residents in recent years, through a complete re-functionalization by creating a visitors centre. The visitors centre has became a point of reference where the local community as well as tourists can find information and suggestions to the area. The site is enriched also by a camping site.

The project of managing the Spinadello is curated by the cultural association Spazi Indecisi in collaboration with the cooperative Casa del Cuculo and the association I Meandri. The Municipality of Forlimpopoli renews the tender every year. Other partner of this initiative are: Unica Reti Spa (owner of the area) and the Municipality of Meldola. The following associations are also involved: Savignano Immagini Association and ATRIUM. Moreover, excursionist organisations, such as Boschi Romagnoli, Quota 900, the scout group of Forlimpopoli and the Technical Institute Saffi Alberti are involved.