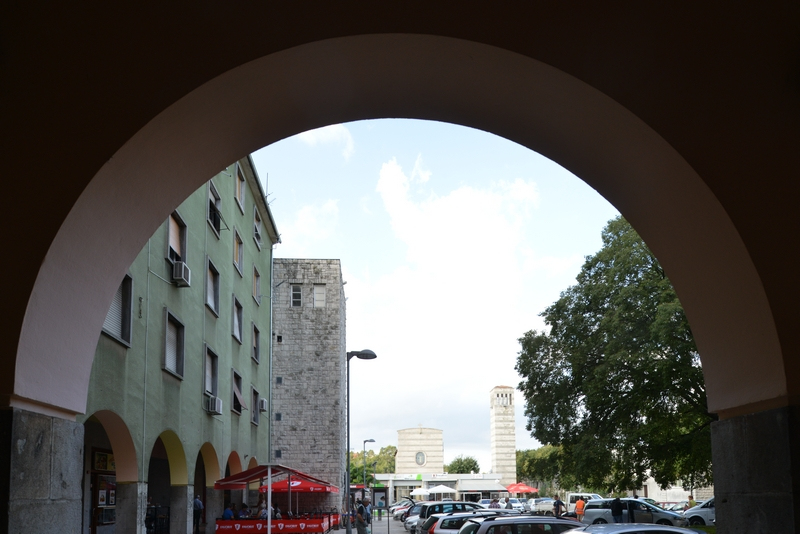 View on the main square of Podlabin: Lictor tower and church tower 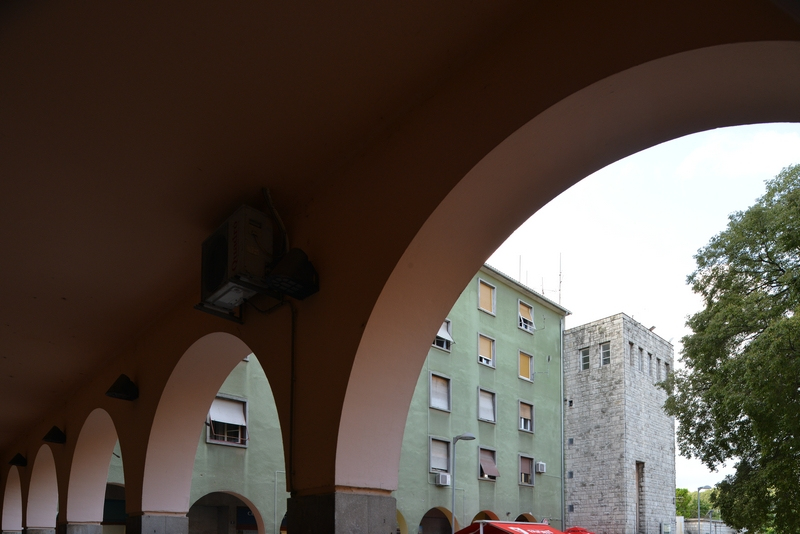 View on the Lictor tower: symbol of political power 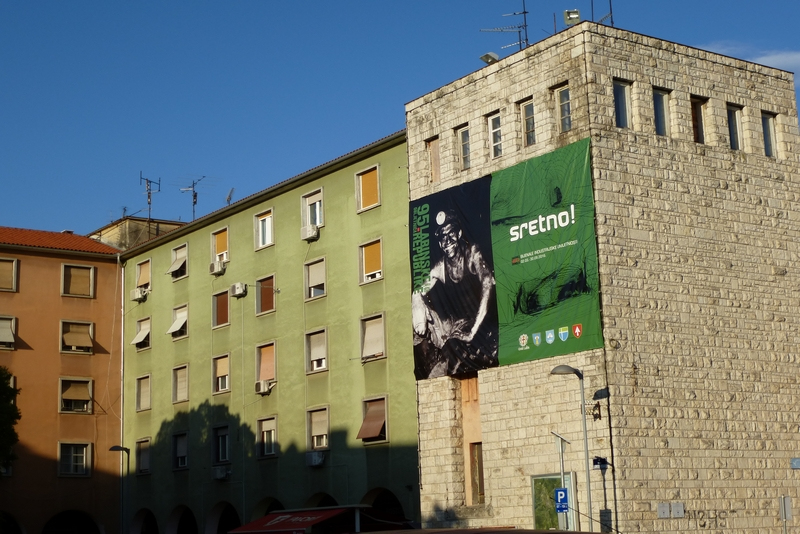 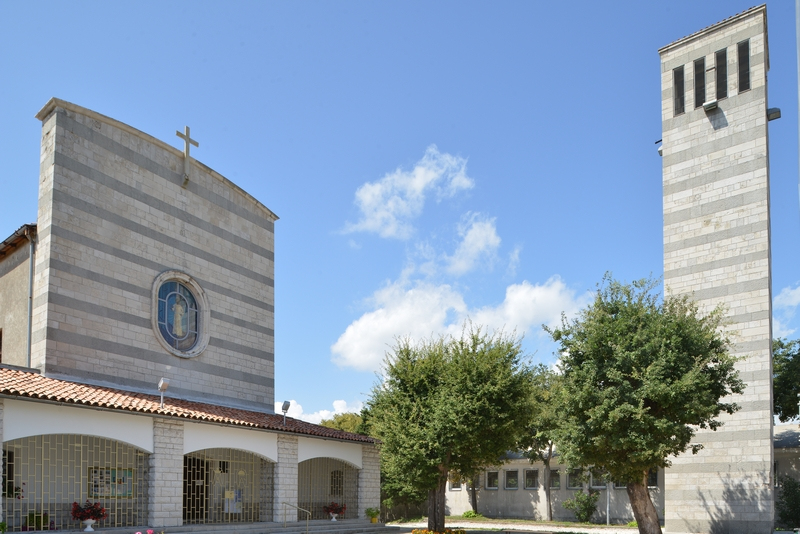 Tower of the Church of St. Francis: symbol of religious power 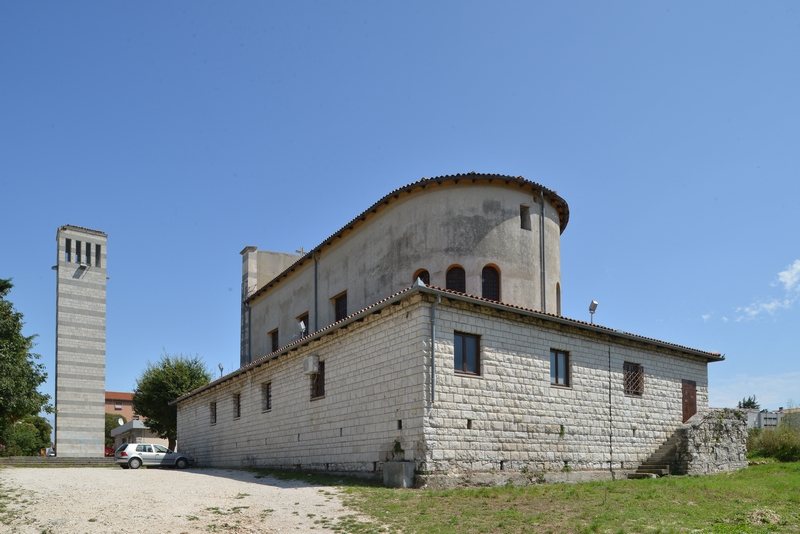 Back view of the Church of St. Francis 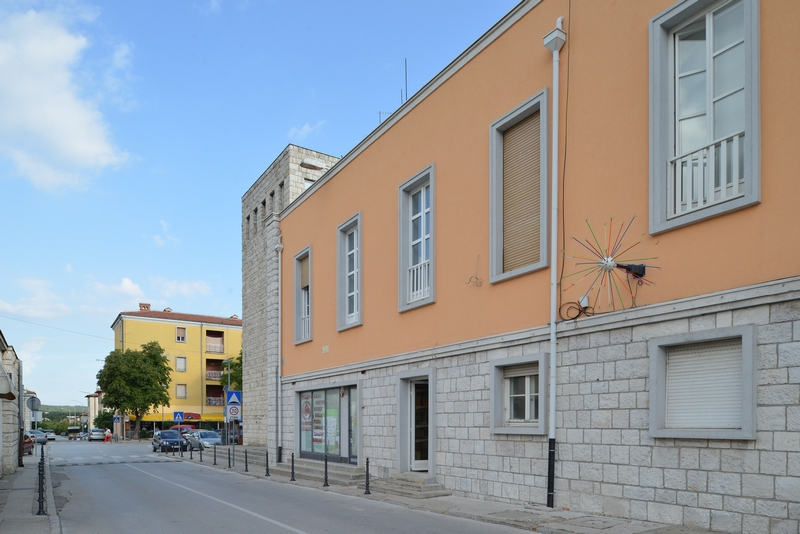 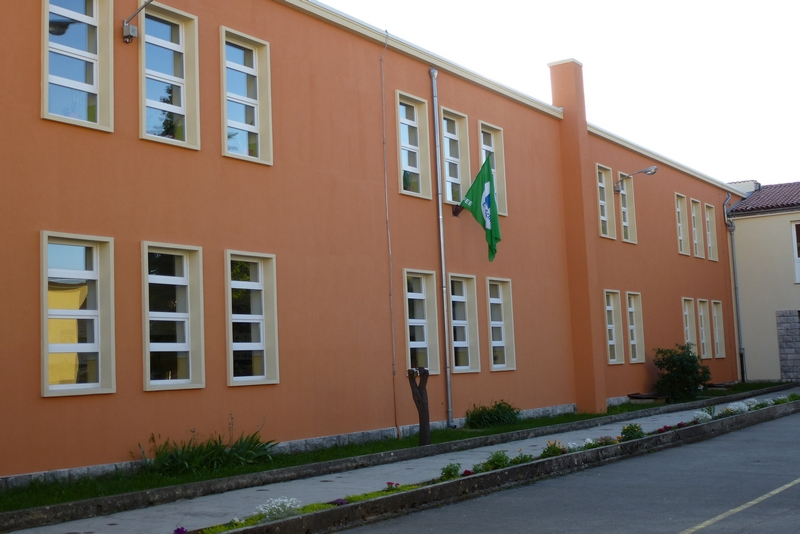 Architect Eugenio Montuori wanted to put special emphasis on two elements in the square: the corner tower (or Lictor Tower) as a symbol of political power, and the bell tower as a symbol of religious power. The larger space of the square was dominated by the prominent corner tower with the attached Ceva building, assuming a civic function, and primarily intended for trade and mass rallies. The smaller space took on a religious function, given the presence of the church and its bell tower. The theme of the square is thus the division between the religious and the political functions.

The Church of St. Francis reflects the concept of a sacred building, visible in the simple structured volumes and futuristic elements. Its entrance porch and deep shadows create some kind of mystic atmosphere. Montuori paid special attention to the design of the church as the most important building in the square. In order to emphasise the importance of the church, the architect designed a monumental façade, larger than its actual dimensions. The separate Italian style bell tower with a square layout, narrow and tall, represents the necessary counterbalance to the compactness of the church façade.

‘Lictor Tower’ (torre littoria) refers to the Roman fasces, symbol of strength, harmony and unity, used also by the Fascist regime. A balcony on the façade facing the square was meant to be a speaker’s platform from which Fascist leaders addressed the crowds assembled beneath. The tower is in fact the only reference to Fascist ideology, which explains why it housed the headquarters of the Fascist Party (Casa del Fascio). With its striking height, the tower dominated all the two-floor buildings around it. The attached Ceva building was named after the initials of its creators, Ceppi and Varsi, two of Monuori’s collaborators. The ground floor of the building enlivened by a playful row of semicircular arcades housed retail shops, while the first and second floor housed flats. After World War II, two more floors were added to the Ceva building as well as to other residential buildings, so that the Lictor Tower lost its dominant position.

The square offers a panoramic view on the old town situated on top of a hill. Other buildings include the recently restored elementary school and the Casa del Dopolavoro (Fascist community centre), which today houses shops and offices.

The old town of Labin built on the site of a prehistoric fortification on top of a hill, 320m above sea level, is surrounded by beautiful forests.

Labin is right next to Rabac, the most famous seaside resort on the Eastern coast of Istria.

The town museum, recommended by Lonely Planet, hosts an archaeological exhibition and miniature coal mine.

There is a Memorial collection dedicated to Matthias Flacius Illyricus, famous Lutheran reformer from Labin.