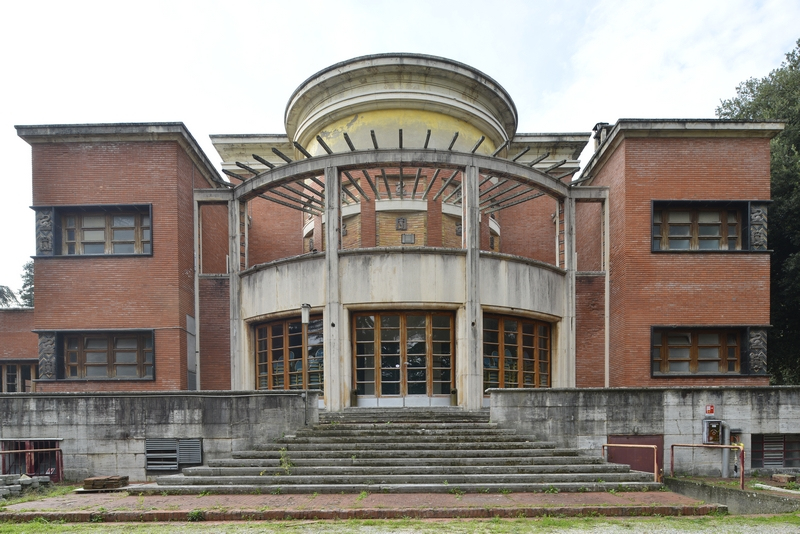 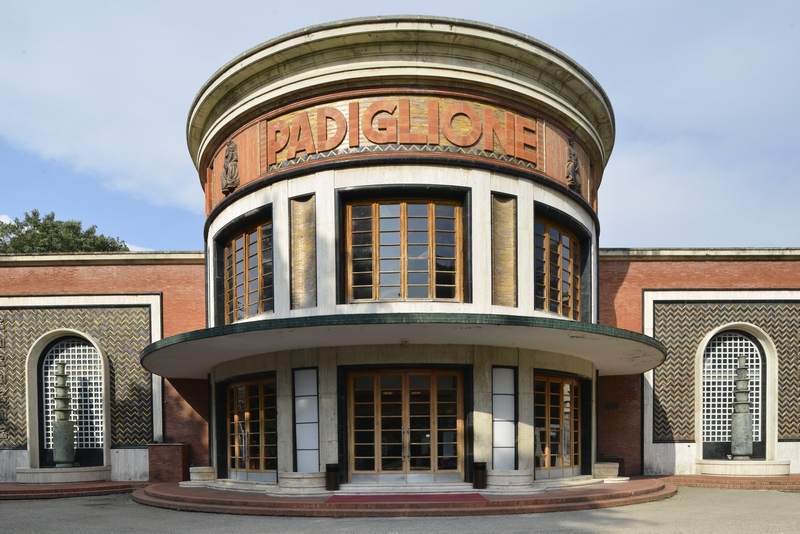 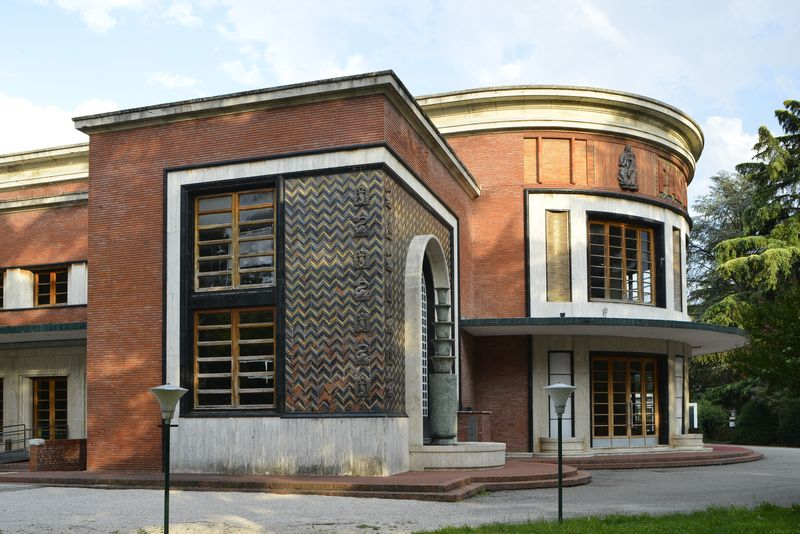 During the Fascist period, the building was destined to leisure activities: dancing, film screenings and gambling 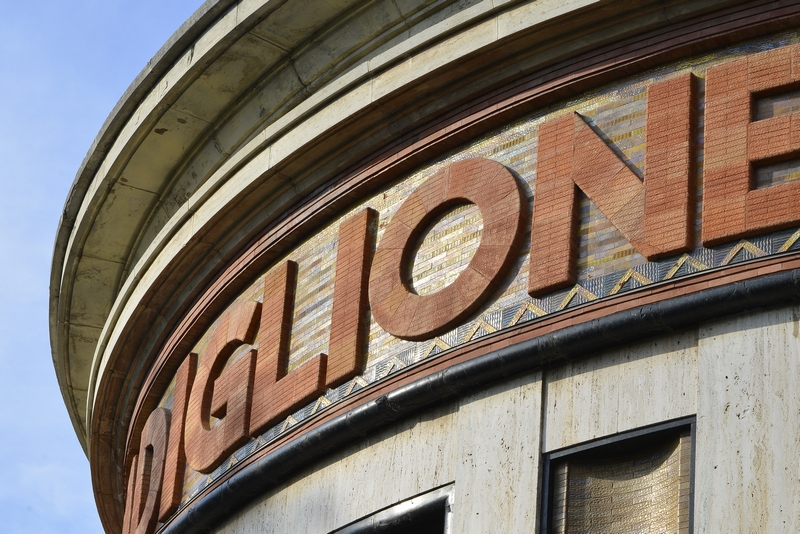 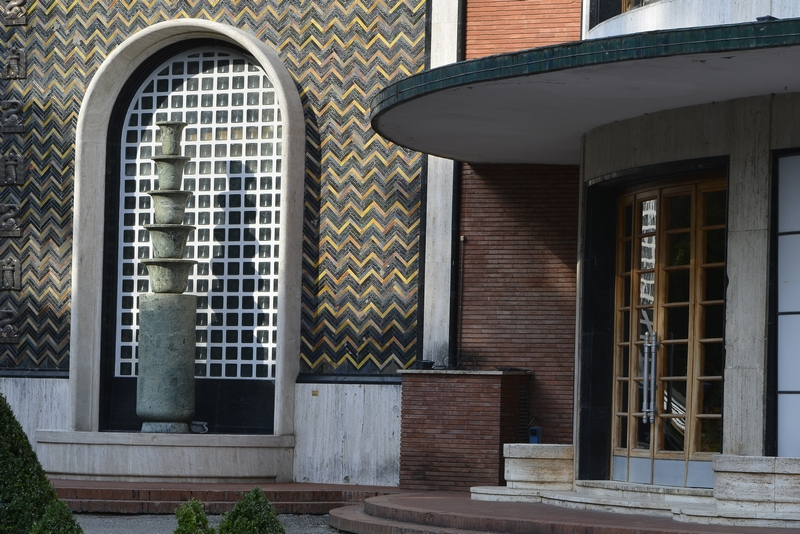 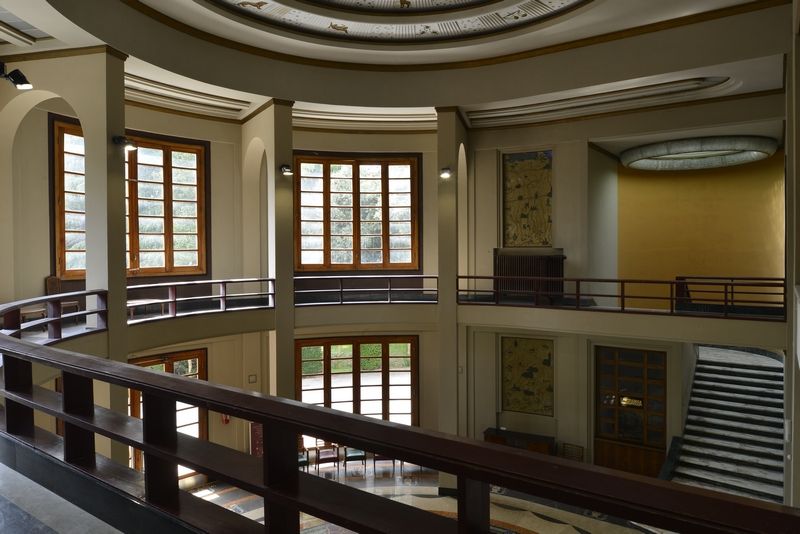 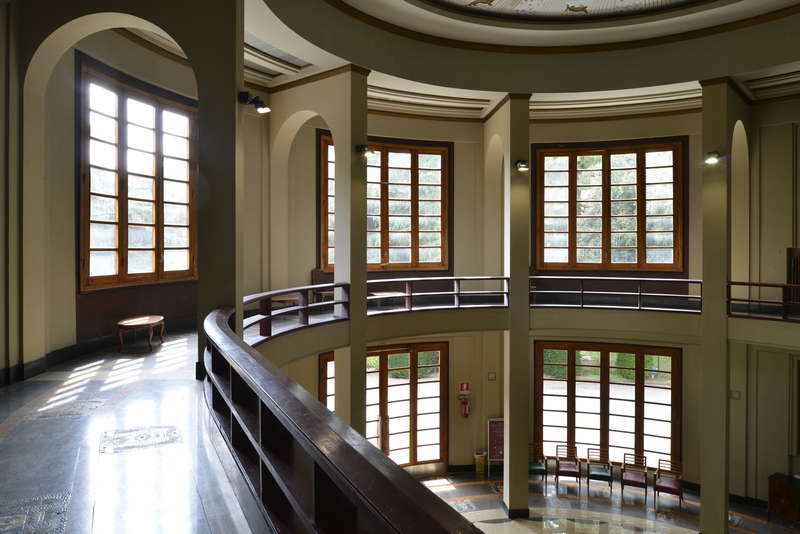 Large windows: the lush green of the park becomes part of the interior design 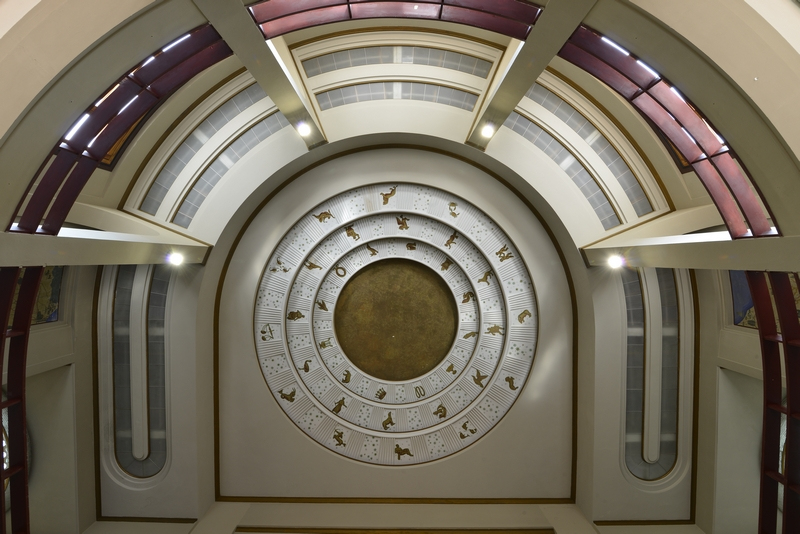 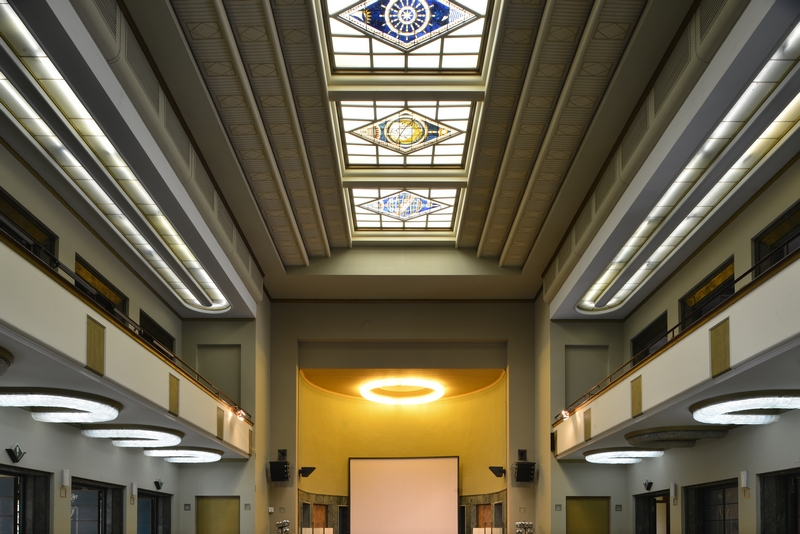 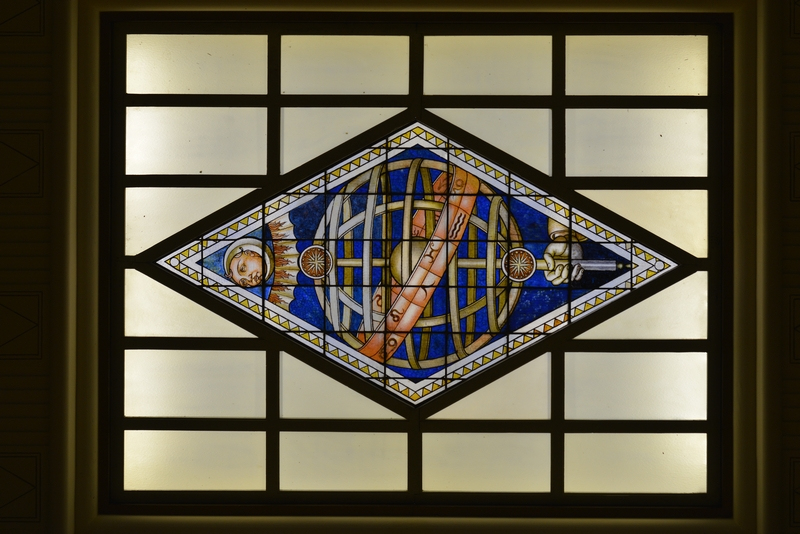 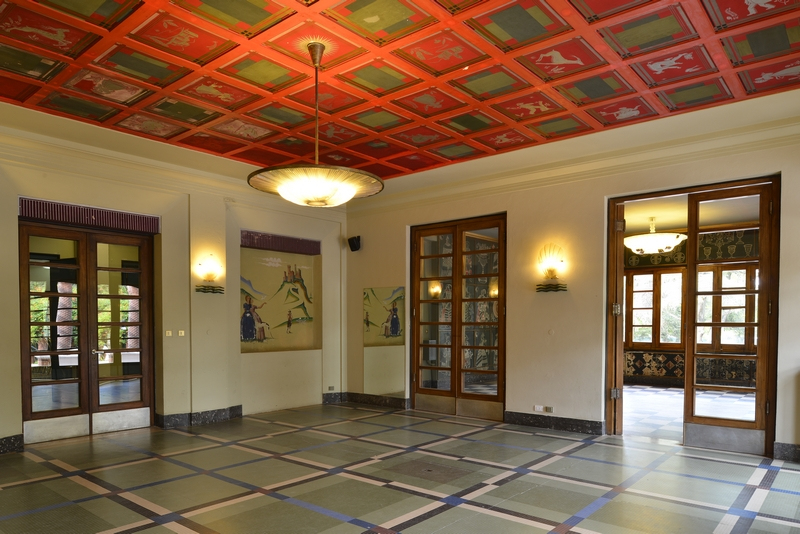 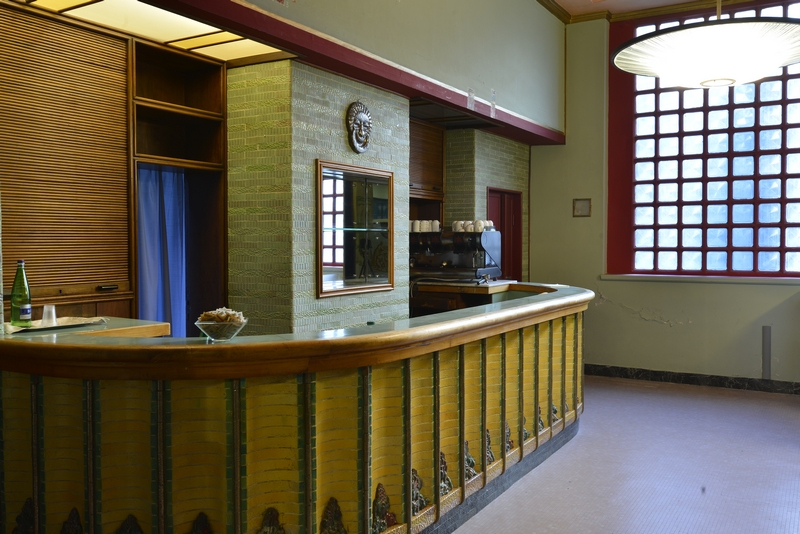 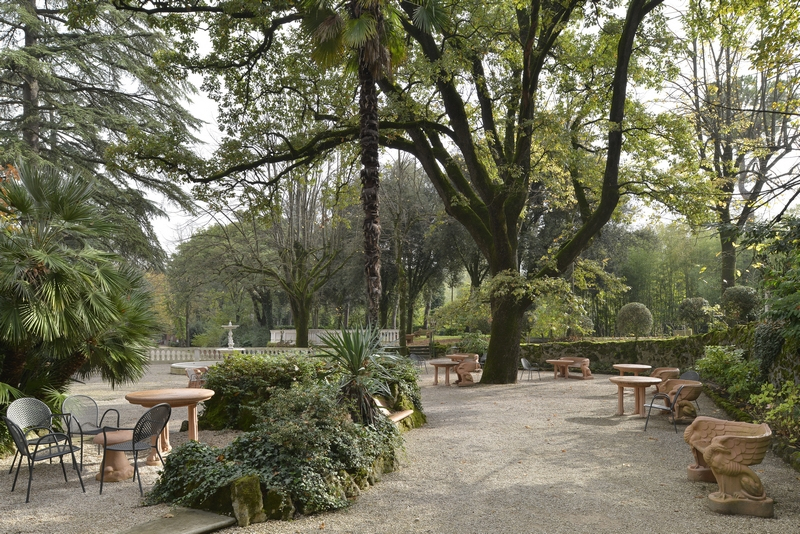 The festival hall is the most mature example of Tito Chini’s splendid Art Déco, perfectly merged with modern architecture, which almost leads us to forget the terrible ideals behind the regime which built it.

The festival hall (Padiglione delle Terme) integrated the Grand Hotel and the spa building, offering a structure for leisure activities such as dancing, film screenings and gambling. Back in 1941, engineer Diego Corsani claimed that the festival hall has been built as part of “the valorisation of the state-owned spa resorts […] for the health of the Italian race and demographic growth”. However, the true reason lay in the intention to meet the taste of a high-ranking international clientele. Thus, it was a place aimed at displaying the grandeur of the regime.

Artist Tito Chini not only decorated the interiors and exteriors of the festival hall, but also introduced significant changes to the architectural design. The “father of the Padiglione” harmoniously combined rationalist architecture with splendid decorations in the style of Art Déco.
The plain architectural design of the exteriors in local red bricks is decorated with high-quality materials: travertine, green marble and iridescent ceramics, manufactured in the famous furnace of Borgo San Lorenzo in Tuscany (owned by the Chini family). Another decorative element are the two big fountains in green marble at the entrance, emphasising the motif of the healing water.

The festival hall is accessed through a spacious two-floor entrance hall leading into a huge main hall surrounded by galleries. Lateral rooms include a games room, a smoking room, a reading room, a billiard room and a bar, each decorated thematically. Large windows create a continuous interaction between interior and exterior space, where the lush green of the park becomes part of the interior design.
The round-shaped entrance hall is of particular beauty. A colourful floor mosaic displaying four sailing boats forms a contrast to the tenuous white and gold ornamentations of the dome representing the zodiac signs.

Important restoration projects were carried out between 2012 and 2014. One of Italy’s most famous art conservationists Camillo Tarozzi supervised the restoration of the glass windows, which decorate the ceiling of the main hall. The five colourful glass windows display a sundial, a map of Eurasia, a ship’s wheel, a map of the Americas and an astrolabe. Another significant project was the restoration of the unique wooden panels in the games room, displaying diverse figures of Italian and French playing cards. Today, the building is used for temporary exhibitions.

Located on the road between Ravenna and Florence, Castrocaro’s famous thermal waters are a major tourist attraction.

Terra del Sole is an ‘ideal Renaissance town’ built by the grand duke of Tuscany Cosimo I de’ Medici.